Spring update: Things to do in Poitou-Charentes

Now that the days are getting longer and the weather is warming up people here in the region start looking forward to the forthcoming season of events and activities. Here are just a few of the early season events to look forward to: 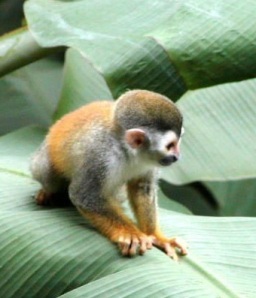 Not this baby, but one similar!

A new species arrives to the park for 2014: Howler monkeys. Howler monkeys are among the largest monkeys from central and south America and are famous for their loud howls, which can travel three miles through dense forest.

March 8th sees the opening of the new season and the stocking of lakes, rivers and étangs across France, with thousands of trout being released into the waterways of the region. Remember that you’ll need a permit to fish but these are readily available, often online and we can help you with this in any event. There are plenty of nearby rivers to fish: the Charente, the Vienne, the Boutonne, to name just three along with lakes and smaller étangs.

At time of writing there have already been a number of events staged in the region but some dates for the diary in the coming weeks are:

This prestigious event is a grand gastronomic tour beginning in Cognac and winding through the Charente to Saint-Emilion and onto Périgord. After an overnight stop in Sarlat the rallye gourmand follows the Dordogne river into the Médoc region before an extravagant arrival at the finish in Cap Ferret. The prix de participation of 2100€ per car and two occupants means that I’ll be watching from the roadside or following from a distance in one of our classic cars!

This years exhibition focuses on race cars from pre-war to the 70s and is to be held in the area around the Place des Quinconces. The event is spread over an area covered by several streets and the displays are numerous and impressive, featuring cars, motorcycles and even boats.

This event at our local race circuit, Circuit de Val de Vienne, is formally known as the Sport & Collection Special 20th Anniversary Edition is a weekend of racing, static exhibitions and on track exhibitions. All profits from this event go to Cancer Research in Poitiers.

There is a rally  on the Saturday, of approximately 200 cars, setting off from L’Isle Jourdain between 8am and 10am. There is a programme of races on the Sunday, some of which are available to similar vehicles. The Ferrari theme includes five car displays, a mix of modern and historic, and another mix of modern and classic cars in Sunday’s race programme. General spectator admission, including the paddock, is available on the Sunday at €20 per person. Parking is free and a reasonably priced restaurant is available for lunch. If you have a classic car, or want the use of one of our classics, then there is display parking available on application in the track area, but hurry because applications should be in before 15th March.

With these and many other events making an early start to Spring attractions why not take a holiday in the quieter part of the season before the schools break up for the summer? Have a look at our gîtes and classic cars and take part in these days outs and events.