The Last Supper: the end of a great week of classic motoring

We were lucky enough to have both La Petite Maison and La Grange booked out for the last week of June by classic car enthusiasts: Rob and Claire in their MGB Roadster with a recently rebuilt and breathed on engine by Oselli; Steve and Emma in their late MGB Roadster, with rubber bumpers removed and looking well for it, and Dick and Anne Francis, who were hiring one of our Citroën DSs during their stay. Dick is a professional restorer (www.carroserie.co.uk) and remembers working on DSs in the late sixties. 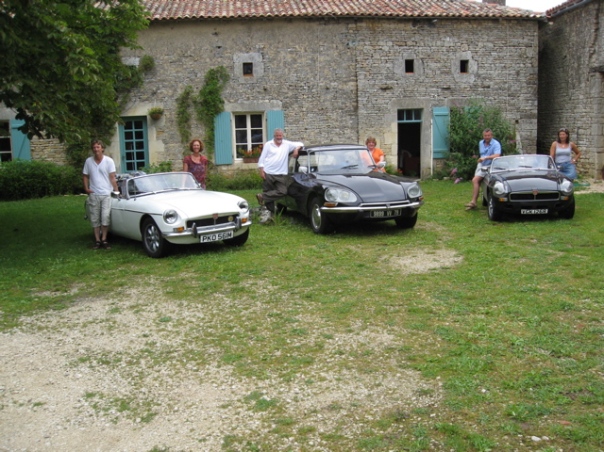 Dick and Anne were the first to arrive on a hot and sunny Saturday afternoon. Dick had booked out the DSuper 5 for the Monday and I knew it would not escape his attention that said DS was just coming back together again following a mammoth job changing the camshaft oil seal. Despite my best efforts and those of Darrin Brownhill of Citroën Classics in Staines I was behind schedule thanks to parts being delayed in La Poste. Thankfully, Dick and Anne were happy to be switched to the DS23ie allowing me to continue with the reassembly at a more sedate pace. My thanks go to Dick for his help – he was in the garage within a couple of hours of arriving showing me how to make a difficult hydraulic union – and to Ann for allowing part of their holiday to be spent fettling and talking old cars.

The MGB crews arrived a little later than expected following a long drive from Calais. The best that I’ve managed Vanzay to Calais without breaking any laws is 5hrs 45mins. Rob had been bedevilled with overheating problems and progress had been slowed as a result, taking more like 8hrs plus. An anxious trip under the circumstances that was not the most comfortable of drives, as Claire and Emma seemed keen to point out! The removal of the thermostat seemed to cure the problem and the Roadster behaved itself for the rest of the week.

Sunday brought another fine day and so Dick and I jumped in the Jag for a morning at the Val de Vienne 20th Anniversary race meet, followed by Steve and Emma in their Roadster. In the sunshine and 32º a morning was just about right for the fair skinned amongst us and so after a good look around for a great value 10€ entry, we returned back for the England Germany World Cup game. We all sat in front of the telly drinking plenty of cold beer in support but it was no good, England were never going to make it against Germany.

Since our two gîte parties had common interests that include a love of good food and wine we suggested that we lay on some food and drink on the Friday night before everyone departed Saturday morning. This was a first for Abi and me to do some catering for guests, but the circumstances seemed right and we figured we could produce a small feast for about 20€ a head. Everyone expressed enthusiasm for the idea and since we were basking in super hot temperatures all week we set to prepping a barbie.

We were pleased to be able to supply all fruit, veg and herbs from our own garden, harvested for the occasion.

Since it was a BBQ we had a thunderstorm that evening! The massive spread of the horse chestnut tree in the courtyard kept the cooks dry (thanks to Claire for her expert assistance) and under the cover of the barn the ocean of booze – thanks to armfuls of contributions from all – meant that it was anything but dry.

As it all wound down sometime after midnight, we all agreed it was a great success and Abi and me hope to be able to do the same for others during their stay with us.

….posing for the camera!

To hire one of our gites and a classic French car, click here.

← A day at the races: Circuit du Val de Vienne
Classic Living for a Week in Poitou-Charentes →