In 2005 I bought my first classic car, a 1961 Jaguar MK2, at Barons auction at Kempton Park. I was bidding against a German guy who was there with his wife and two young boys. He was disappointed to lose out to me but I was determined to have that car.

Whilst he drove off with his family after the auction I had the problem of driving my new Jag back to Lillingstone Lovell. Luckily, I had my classic car mentor, Andy Murray, with me and so he set off with a can for the petrol station. We got under way heading down the A3 to pick up the M25, stopping en route for some fuel. As we were pulling into the petrol station the rear right brake seized on, freeing itself only after we pulled up for fuel. At this point, I also noticed that the tyre was badly in need of air – actually, it needed changing and so up onto the jack, before promptly rolling off it! At this point I was really wondering what I’d done, remortgaging the house to buy this beautiful looking nail. We finally made it back to The Bull and Butcher pub in Akeley, home of the local classic enthusiasts about mid afternoon, only to find the German family drinking at the bar. Surprises all round, plus photos and the swapping of stories. They had come from Germany on holiday with the intention of buying my Jag at Barons and driving it back to Germany. He had a lucky escape then! That was in the June and whilst the car looked spotless, the engine was in a bad way, with corrosion in the cylinder head, burnt valves from using unleaded petrol and some damage to the bores. A major rebuild was undertaken by Topserve Autos in Brackley and a re-manufactured cylinder head converted to use unleaded petrol was fitted. Whilst they were at it with the engine out a new clutch was fitted. At this point I must also give thanks and raise a glass to the following people, who assisted (read as “mainly did”), encouraged and bullied me into doing much good work on the Jag’s wellbeing over the following 2 years:

Vince Bryan – mechanic extraordinaire who gave up much of his time freely to rebuild the gearbox, renew the rear suspension, pinion seal, etc etc

Andy Murray – engineer and auto electrical expert who gave up many hours freely to, amongst many other things, restore the horn ring function, restore the many non-operational electric functions to operational, renew the front brake lines, overhaul the callipers (thanks to his firm’s sonic bath)

Mark Heale – a skilled mechanic used to working on historic racing cars but no slouch with a MK2, for the help and the beer afterwards

The joke amongst the classic car owning fraternity of The Bull and Butcher was that I had bought this to take part in the annual drive down to Angoulême for the Circuit des Remparts historic street race and that it was now the day of our departure and no sign of the Jag back from Topserve. It was delivered on the back of a low loader at 11am to the garage who were doing some last minute fettling before we jumped in and set off for Portsmouth for the overnight crossing to St Malo. With a 500 mile running in period ahead of us it was difficult keeping ahead of Andy Murray’s Vitesse but not of Chris Joy’s historic Chang Jiang motorcycle, the CJ. The CJ was originally developed for the Chinese People’s Liberation Army and speed was not in the brief, as detailed in this from http://www.changjiang750.com/advice.htm:

CJ motorcycles are not made for speed. The speed factor does not apply for bikes made to cruise and not to race. It is not advisable to go fast on a CJ motorcycle as these are not designed for. They braking system is not suitable for high speed such as their general design.

Even if your engine can reach speed of 60 mp/h and up it is not a good thing to do as it will shorten the life of the engine and its component.

Andy Murray in his Vitesse (with the Jag behind)

I had driven in France over the years but that first outing for the Jag to Angoulême was as good as it gets. Perfect roads, well mannered drivers respectful of old cars and what appeared to be a universal love of Jaguars by the French. I’d not had so much fun since a load of us used to come to France on motorbikes to make the most of the empty, well maintained roads (as fast as we possibly could!).

Roll forward a couple of years and a couple more trips to Angoulême and we’re en route past Abbeville on an empty A28 in the Jag to view some properties in Dordogne and the Charente. Suddenly, with a loud bang, the 1961 toughened windscreen shattered. The older reader will remember that unlike modern laminated windscreens, toughened glass shatters into small fragments, just like this:

It was very difficult to make the (young) agent from AXA understand that, no, I could not drive it to Rouen or Dieppe to a windscreen repair centre. We made our way off the motorway and into Neufchâtel-en-Bray and so began an unscheduled set of events that made the continuation of our trip through France possible but only with the tireless and commendable help that AXA (the French agents of our UK insurance agent, Footman James) gave us over the coming days. Firstly, they found a hire car for us on Sunday. In France, nothing happens on a Sunday. Consequently, the nearest pick up point for the hire car was Charles de Gaulle airport in Paris! So, they sent a taxi and by 1.30pm Sunday afternoon we were lost on the Periphique trying to find the A10 south for our trip to that night’s stay in Brantôme in Dordogne. It’s amazing how fast a Renault Kangoo 1.2 will go and we were there in time for dinner. Meanwhile, we’d left the Jag at a garage in Neufchâtel-en-Bray to an undetermined fate……..

Buzzing around south west France in the Kangoo over the next few days took us to La Ferme de L’Église, where we are now happily settled. En route back towards St Malo AXA called to tell us to stop at the auto glass company in Rouen, dropping the hire car off at the airport (airport?), a landing strip at the top of Rouen only inhabited by flying clubs and parachutists. A taxi took us to the auto glass company where the Jag with it’s new laminated windscreen was presented to us by Monsieur Responsible (the manager in French, but a wonderful title nevertheless) and his proud team of glass experts. This was a very fine piece of work indeed and whereas before the windscreen leaked so badly that Abi’s handbag would fill with water in the footwell, now, when we were poured on back in Dover, not a drop of water came past the new windscreen. Furthermore, I have never found a piece of the original screen when cleaning or working on the car since – a true testament to the thorough job that was done.

Roll forward just 2 months and we were once more driving to south west France, but this time for good. Abi was in the Audi and I was in the Jag, on what turned out to be a bit of an epic journey to our new home in Vanzay. First, we had to get to the notaires’ office in Ruffec for a 4pm appointment to meet the owner for the signing of the sale contract. Somehow, I’d done an AA route finder search before leaving and got the wrong Ruffec, a small village some 90km away from our imminent appointment. Finally, we moved in the following day and I reassured the Jag that that was the last time she would have to stop start through traffic jams on the M25. Old cars don’t like that sort of thing. 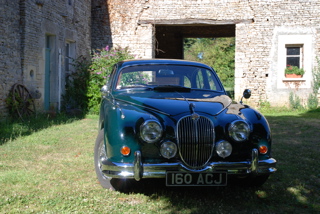 Now that we were here, the next car project began to take shape, realising a long term aspiration to own a Citröen DS………….

Want to drive one of our classic cars? – click here